With some of the best hotels and restaurants in the world, and not forgetting enough designer shops to keep even Kim Kardashian busy for a while, Paris has everything the luxury traveller is looking for.
Paris is great all year round, but we recommend heading there in August when the locals have all headed down to St Tropez or Antibes for their summer holidays, leaving the restaurants and bars free for the tourists to enjoy.

Four Seasons George V
For me, The Four Seasons George V Hotel is the best hotel in Paris. The rooms are beautifully appointed, the hotel interior is decadent, and there is an in-house two Michelin star restaurant.
Add to this impeccable service, a long and distinguished history and a reassuringly expensive price tag, guaranteed to keep the riffraff out, and you can see why the George V is the hotel of choice for celebrities and dignitaries alike.
Rooms start at around 1,000 Euro per night, so bring your Amex.
Le Bristol Paris
David Beckham took up residency in Le Bristol during his time at Paris St Germain (slow down ladies he isn’t there anymore!). This fact alone should be enough of a reference and signals Le Bristol to be one of the best hotels in Paris.
Le Bristol Hotel is located in the heart of the city’s arts and fashion district. Rooms have been decorated in renovated 18th-century opulence, and the hotel contains a one Michelin star brasserie and 3 Michelin star fine dining restaurant Epicure.
There is a pool where you can take in the Paris skyline and a beautifully manicured garden for afternoon tea.
Rooms start at close to 1,000 Euro per night.
The Hotel Particulier Montmartre Paris
If you are looking for something a little more private, The Hotel Particulier Montmartre is a hidden gem. The former home of members of the Hermes and Rothchild families the mansion, built in 1871, has a delightful walled garden where you can eat breakfast under the trees in perfect preparation for a leisurely stroll to the Sacre-Coeur through the cobbled streets of Montmartre.
There are five suites, and prices start at around 400 Euro per night.
Le Pavillon De La Reine Paris
Le Pavillon De La Reine is a delightful, 54 room boutique hotel set within a 17th-century building among the art galleries and shops of the Place Des Vosges.
The location is perfect, within easy walking distance of the restaurants Bofinger and Le Train Bleu, and tourist attractions such as The Notre Dame Cathedral and the Bastille Opera House.
Rooms start at 300 Euro.
Hotel Barriere Le Fouquet’s Paris
Hotel Barriere Le Fouquet’s is a 5* luxury hotel situated where the Champs-Elysées meets the Avenue George V. If you like designer shops this is one of the best hotels in Paris due to its excellent location among the designer outlets of Jean Paul Gaultier, Hermes and co.
Hotel Barriere Le Fouquet’s has a fabulous, stylish cocktail bar (everything in this hotel oozes lavish design) and a beautiful open courtyard where you can enjoy dinner during the warmer months of the year.
Rooms start at just over 600 Euro per night.
Hotel L’Hotel Paris
Oscar Wilde’s former home, Hotel L’Hotel is nestled in the heart of the Left Bank and is the smallest five-star hotel in Paris. L’Hotel Paris is cosy and chic and is also home to the renowned one Michelin star Le Restaurant.
Rooms start just north of 350 Euro per night.
Hotel Du Petit Moulin Paris
Located in the trendy Haut Marais, the 17 bedroom boutique Hotel Du Petit Moulin, set behind an original boulangerie shopfront, is both lavish and eclectic, reflecting the history and art of this area of Paris.
Popular with visiting celebrities due to its privacy and luxury ambience, the hotel is only a short walk to the Picasso Museum and situated close by to some great hidden away restaurants and wine bars.
Rooms start at around 200 Euro.
Hotel Relais Christine Paris
Situated in the heart of the Left Bank the Hotel Relais Christine is a boutique hotel built on the remains of the Abbey of the Grands-Augustins, founded in 1231.
The hotel has a private garden and spa and is an excellent option for those seeking a little privacy and charm.
Rooms cost around 400 Euro per night.

Epicure
Epicure at the Le Bristol Hotel Paris is a three Michelin star, fine dining restaurant. We dined in Epicure for my mother’s 60th birthday, and the restaurant was the perfect setting to meet the grandeur of the occasion.
I have to say the food was slightly underwhelming, but as regular readers will know I prefer rustic over Michelin. Be prepared to spend about 500 Euro per person…
Le Cinq
Le Cinq at The George V Hotel is another three Michelin star restaurant set within one of the best hotels in Paris.
The food at Le Cinq is exquisite and the service second to none. I highly recommend the Turbot or Monkfish if they are on the menu!
Le Train Bleu
Don’t be put off by the fact that Le Train Bleu is located in the Gare De Lyon. This is Paris, and things are never that simple. Coco Chanel and Brigitte Bardot were regulars at Le Train Bleu if that adds the sufficient kudos to tempt you in.
The dining room is one of the most opulent you will find anywhere in the world, and you could very well be dining at the Opera House or Palace of Versailles given the decor.
The food at Le Train Bleu is traditional with must-haves such as leg of lamb, duck foie gras, Dover sole and homemade smoked salmon.
Bofinger
The best brasserie in Paris is without a doubt, for me, Bofinger. Located just around the corner from the Gare De Lyon, Bofinger is a Paris institution. Bofinger is everything you want a Paris brasserie to be. Steeped in history, with brass handrails galore, you can feast under the magnificent stained glass dome on an entree of oysters before tucking into Dover sole or an immense choucroute for your main.

Things to do Paris

The major tourist attractions speak for themselves in Paris with The Eiffel Tower, Notre Dame Cathedral and Arch De Triomphe all well worth a visit for the photo opportunity if nothing else.
Take a stroll around the cobbled streets of Montmartre, slipping into the fantastic array of art shops on your way to the Sacre-Coeur.
The Louvre, the world’s largest museum, is also a must-see. There is a hugely impressive collection of Egyptian artefacts, and the Louvre’s art collection includes Leonardo da Vinci’s, Mona Lisa.
Le Jardin du Luxembourg Palace is the perfect place to get away from it all with its lush green lawns and Medici fountain.
For those of a more morbid inclination, the Catacombs of Paris make for a fascinating look into Paris’s past. The underground tombs hold the remains of more than 6 million people.
In the evening why not hit a show at the Moulin Rouge or the Paris Opera House, and then finish up with a cocktail in the Hotel Barriere Le Fouquet’s.
Take in a six nations game at the Stade De France. There is nothing quite like hearing 80,000 french men and women singing the Marseillaise in unison.
Personally, I love to stroll around the Left Bank between long, lazy meals, taking in the Latin Quarter, refuelling with a chocolatey double espresso or carafe of wine or two on the way.

During the day we tend to dress comfortably in jeans (Superdry or Hugo Boss are my preference while Gem opts for Ted Baker) as there is a lot of walking between restaurants and shops. I wear a tweed jacket and shirt if Bofinger is on the menu.
At night we glam up with Armani chinos, Hugo Boss shirt and Russell&Bromley shoes for the men, and Vivienne Westwood evening dress and Jimmy Choo heels for the ladies. Don’t forget the Chanel handbag!

How to get there

My preferred mode of travel from London to Paris is to take the Eurostar Business class. I find it far more civilised than flying these days.
You can fly direct to Paris Orly from London City Airport with Air France or Cityjet. British Airways and many budget airlines also fly from all the main UK airports.
ARTICLE COURTESY OF…….https://www.lebonlifestyle.com/ 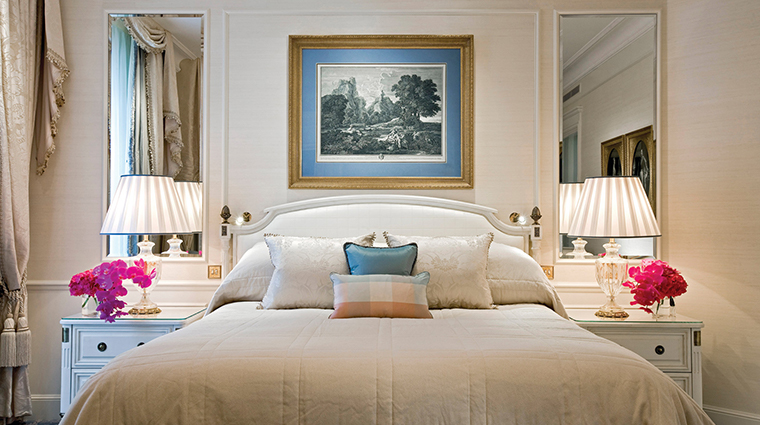 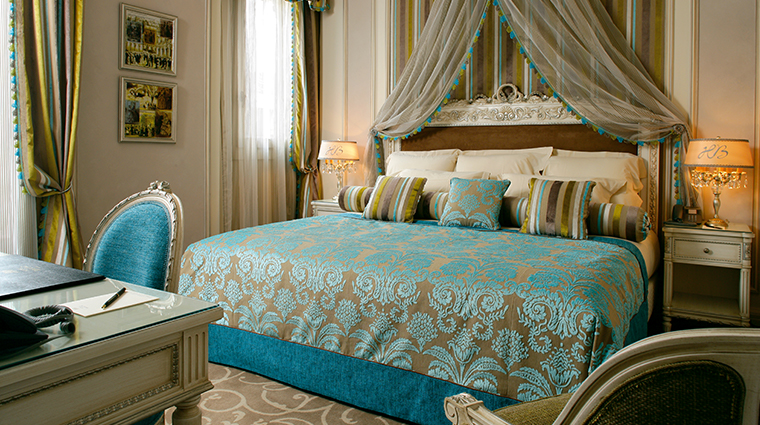 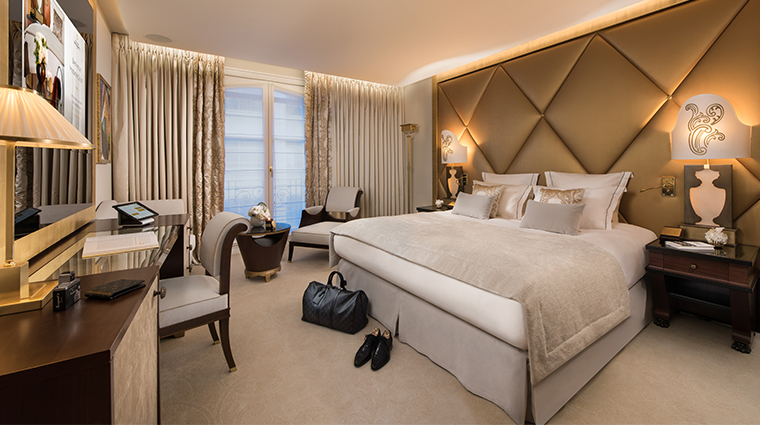 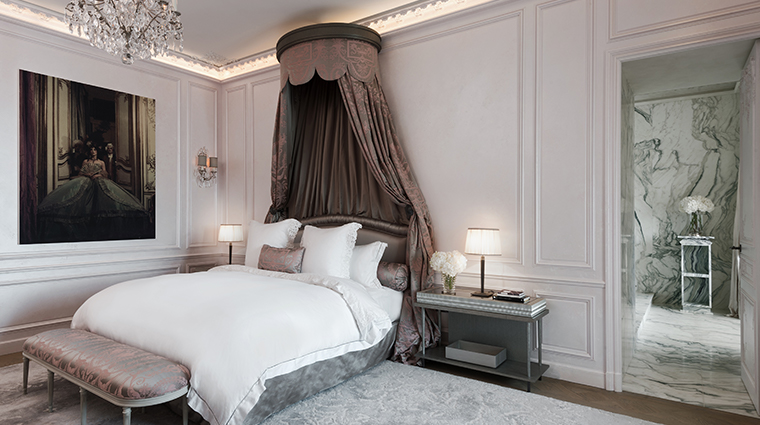 ONE OF THE BEST ROOMS OF 2019
Hôtel de Crillon, A Rosewood Hotel
The renaissance of a French neoclassical palace
PARIS, FRANCE 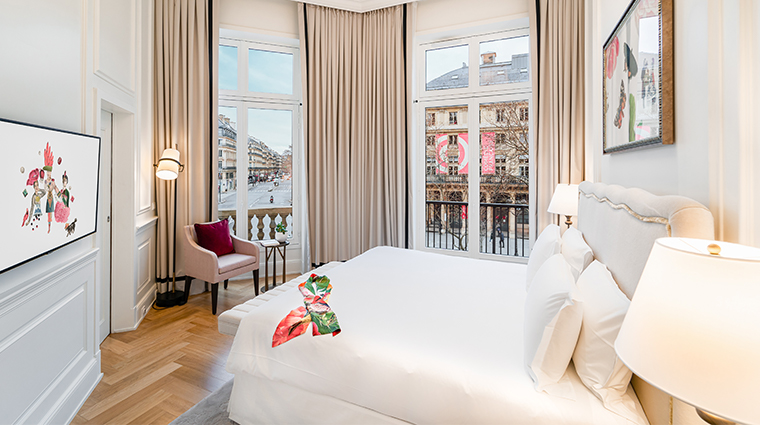 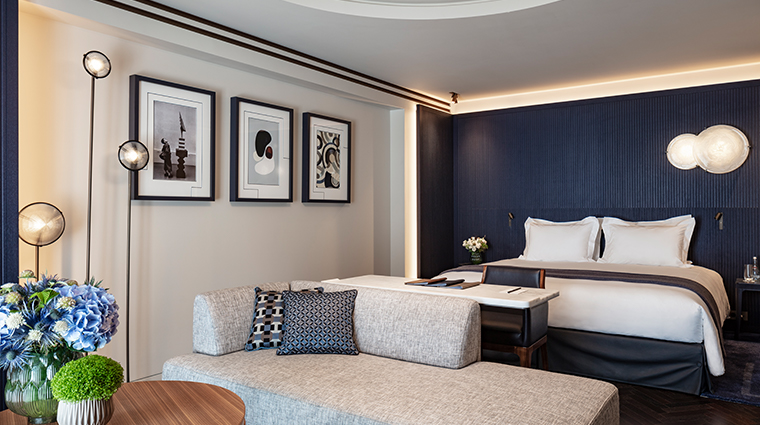 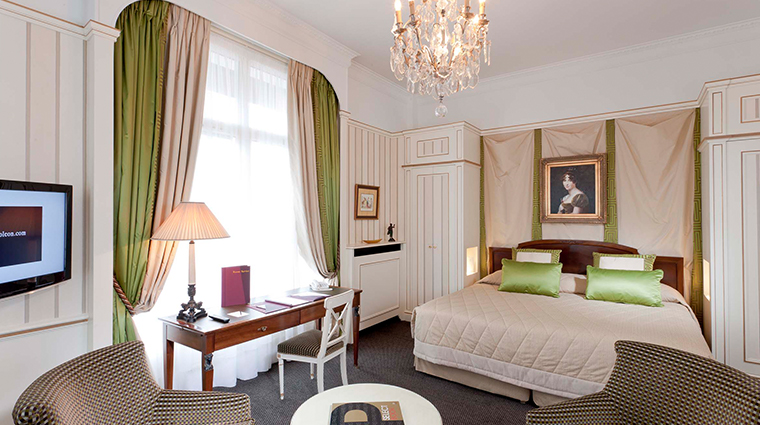 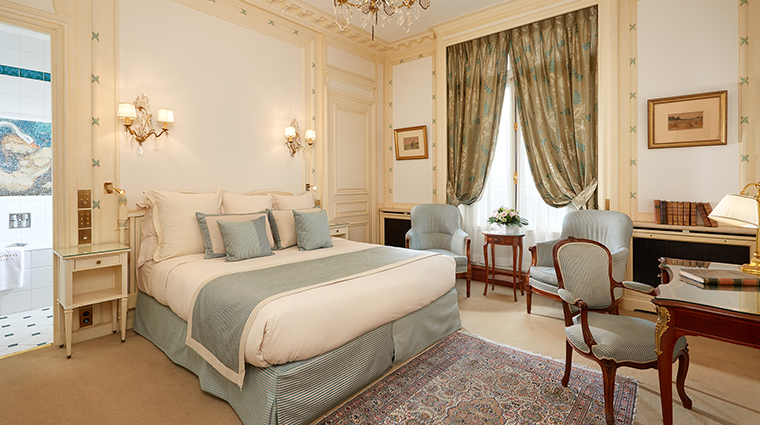 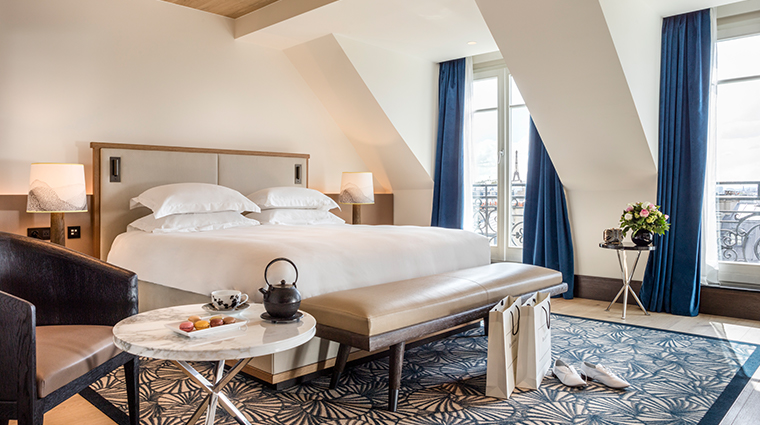 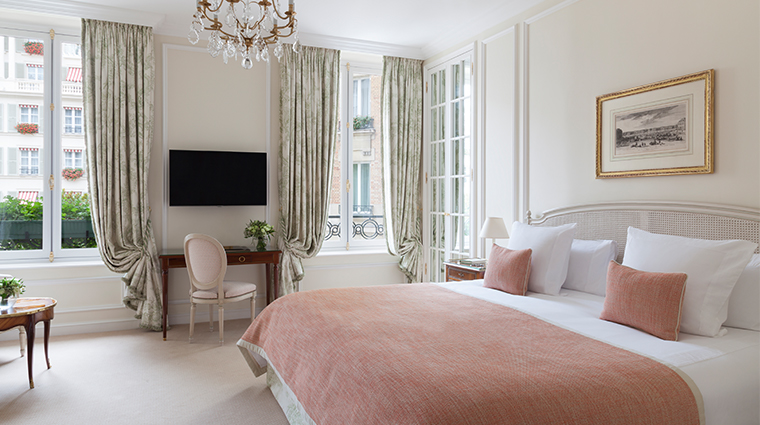 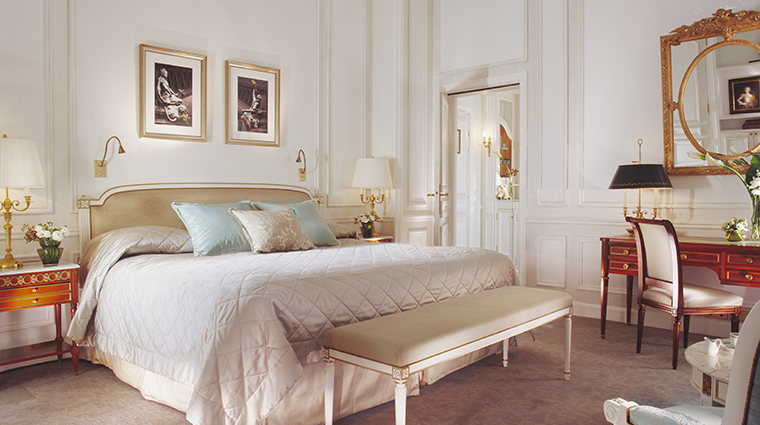 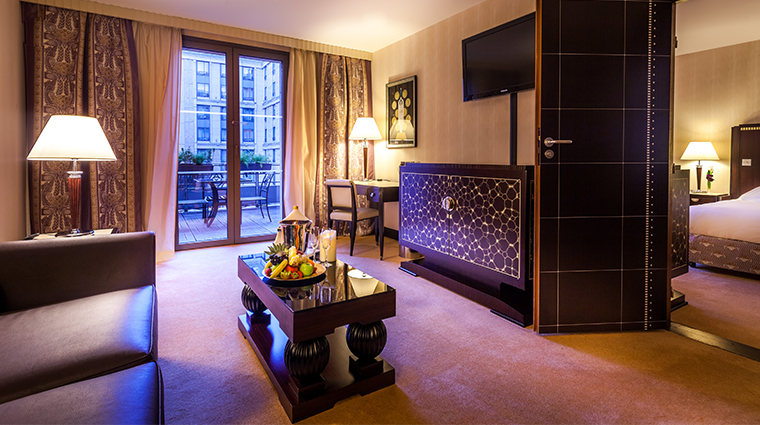 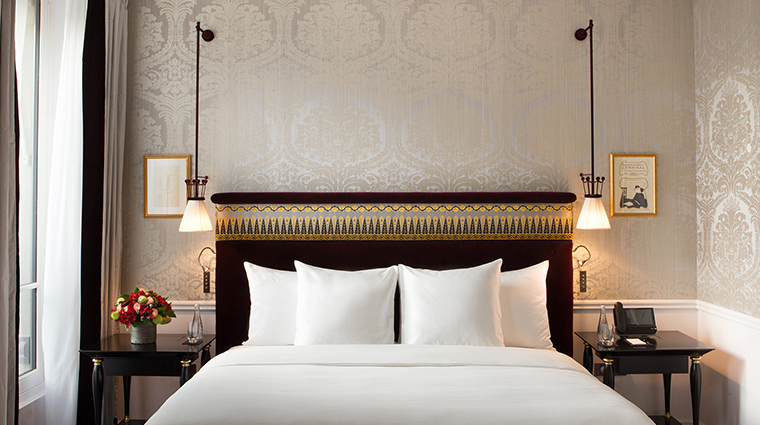 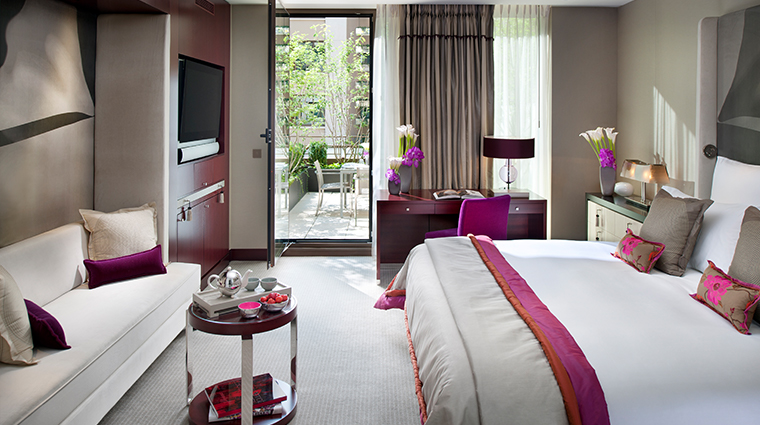 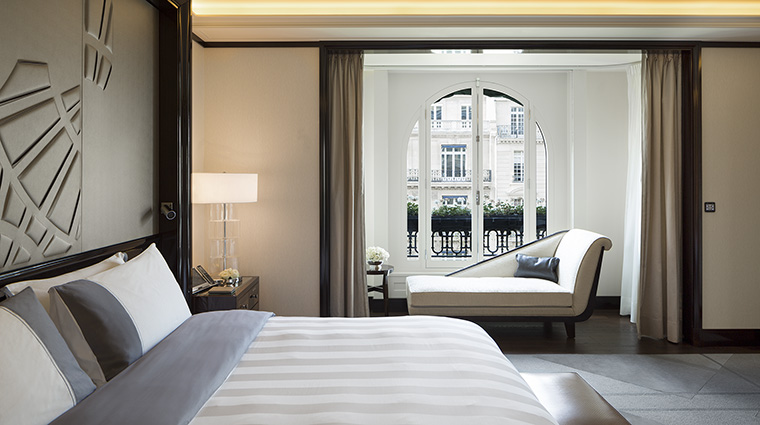 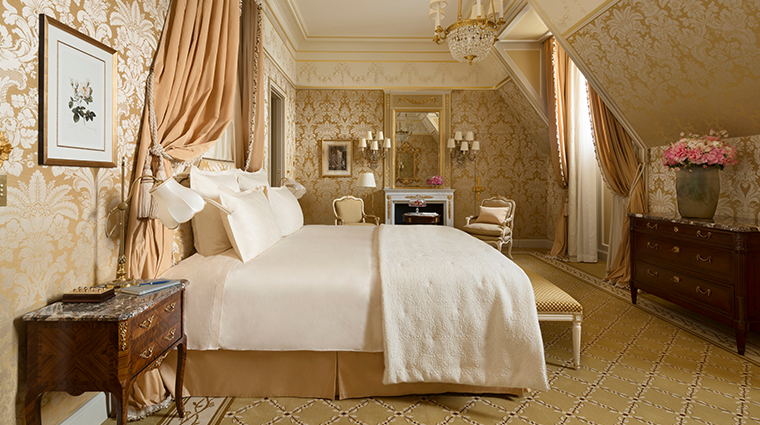 ONE OF THE BEST ROOMS OF 2019
Ritz Paris
Paris’ opulent treasure
PARIS, FRANCE 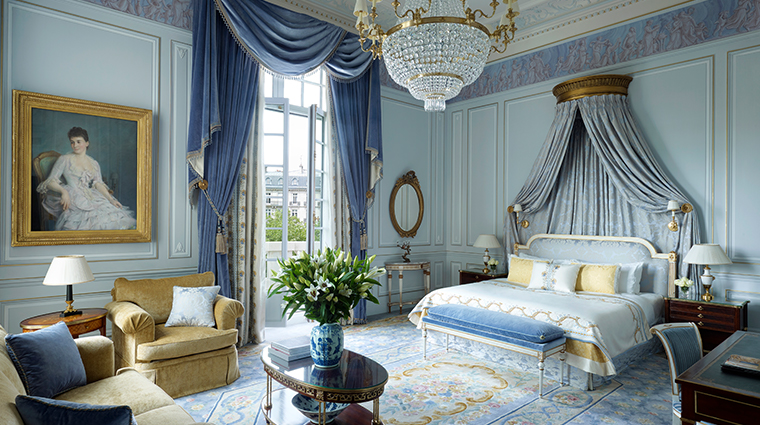 Shangri-La Hotel Paris
Live like a Bonaparte in this French palace
PARIS, FRANCE 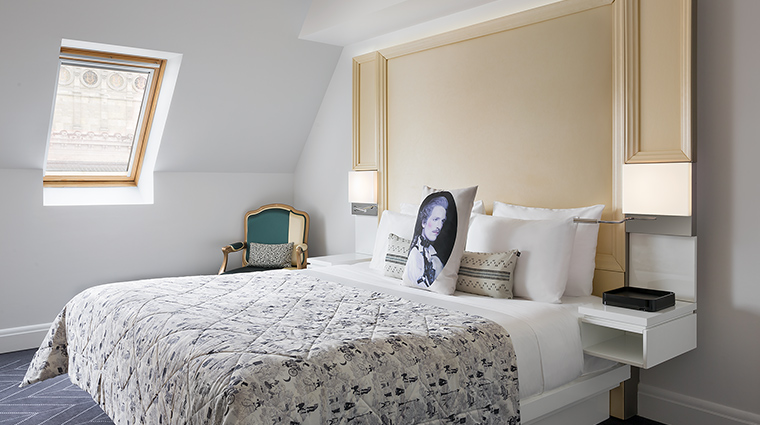 We know how hard it can be to select a restaurant in a city like Paris, after all, it is a city known for its cuisine, not only local but international and the never-ending offer of stunning places to have a meal!

Keep reading to know more about these irresistible Parisian restaurants!

Le Meurice continues to write its history by remaining true to its time. The hotel called on the talents of Philippe Starck for his spaces impregnated with surrealism, and to Alain Ducasse whose french cuisine already infused the soul of the establishment.

A gastronomic experience designed to surprise and delight. Chef Nicolas Sale invites you to enjoy the most creative, refined and elegant dishes, from a gentle morning breakfast to an experimental lunch or an unforgettable dinner in one of the best restaurants in Paris. Let the spirit of the Ritz Paris be your guide.

La Tour d’Argent is a historic French restaurant in Paris, France. And not only has amazing views over the city but also an impressive wine cellar. But wait, there’s more, it’s also Michelin starred.

See also: 5 Parisian Cafés You Need To Know About

Every meal is carefully prepared at this luxury restaurant located on the banks of Seine. The dark setting, divided in six rooms, is decorated with contemporary works of art.

At Epicure, the celebrated chef Eric Frechon, who holds three Michelin stars, has created a temple of gastronomy that is absolutely French. His macaroni stuffed with black truffle, artichoke, and duck foie gras, gratinéed with aged Parmesan is an unforgettable dish that people travel to Paris to experience. Epicure can be enjoyed every day of the year, with tables laid in an exquisite garden setting throughout the summer.

Situated in the 8th district, Pierre Gagnaire’s genius consists of equal proportions in impulsive intuition and careful thought making him a poet  in the kitchen. His French fine dining menu is the most inventive in Paris. And the cellar definitely stands out!